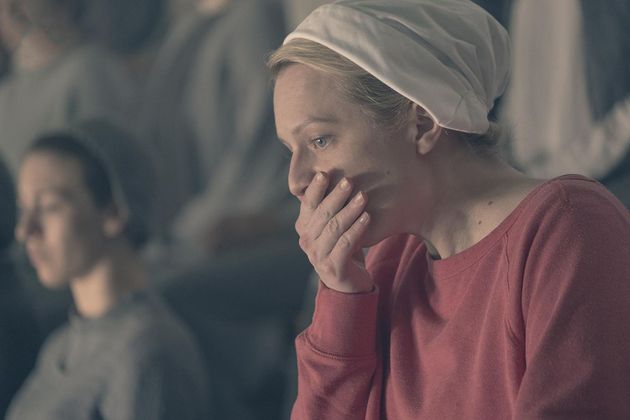 Elisabeth Moss in season 2 of “The Handmaid’s Tale”

ABORTION – “Welcome to The Handmaid’s Tale”. The American Supreme Court has just put an end to a judgment dating from 1973, guaranteeing the right to abortion for all women in the United States. This Friday, June 24, in the process, 13 states including Texas or Louisiana passed laws prohibiting abortion. A dramatic throwback to the rights of women to dispose of their bodies, which some people evoked in a popular series adapted from the work of Margaret Atwood.

In The Handmaid’s Tale, broadcast since 2017 in the United States and available on several platforms in France, the totalitarian and imaginary Republic of Gilead has replaced the power in place. Faced with the violence of environmental disasters and the drastic drop in the fertility rate, the country fell into the hands of a sect of extremist Christians who decided to make the few still fertile women their slaves in order to ensure a descendant. .

The heroine Elisabeth Moss embodies June, one of those women of the “servant” class dressed in a white bonnet and a scarlet red cape stripped of their citizenship status and of all the rights that go with it. Tortured, humiliated and raped, her only “function” is to procreate for one of the most powerful couples in this new republic.

And while many fans are waiting for season 5 of the series, scheduled for September 14, the historic reversal of the very conservative American Supreme Court on the right to abortion immediately inspired this parallel. “A terrifying flashback that we only thought was possible in Handmaid’s Tale…”, reacts a user, when others point out that the widely rewarded series should be “a warning”, “not a manual”.

The American journalist Kate McCann thus testifies to her disgust: “This decision opens the way for States to ban or drastically restrict abortions. It could also jeopardize protections around contraception, same-sex relationships and marriages. What a dark and depressing time in our history. I feel bad. I feel like I’m in The Handmaid’s Tale”.

Terrible terrible news for the rights of American women to control their bodies. A terrifying throwback that we only thought possible in Handmaid’s Tale… https://t.co/zCxNSbYjHo

The Handmaid’s Tale was a warning, not a manual.

The next step will be the return of the guardianship of men over their wives?!
Like a dangerous tune from The Handmaid’s tale… https://t.co/p4sRjgMP64

And that’s how you go from fiction to reality. The Handmaid’s Tale is coming 😓 https://t.co/WP1BiK4ew1

This ruling paves the way for US states to ban or severely restrict abortions. It could also put protections on contraception, same-sex relationships and marriage at risk. What a dark, depressing moment in history this is. I feel sick. I feel like we’re in the Handmaid’s tale. https://t.co/PmhDhpEAQa

“This decision paves the way for states to ban or drastically restrict abortions. It could also jeopardize protections around contraception, same-sex relationships and marriages. What a dark and depressing time in our history. I feel bad. I feel like I’m in The Handmaid’s Tale”

In recent years, the series – inspired by feminist author Margaret Atwood’s 1985 novel – has become a symbol of the struggle for women’s rights in the United States and around the world. In 2017, while a health reform was under discussion on Capitol Hill threatening to reduce government aid to the health system, demonstrations by “Servantes” had multiplied.

The leading actresses and actors of the series have, on several occasions, taken a stand against the anti-abortion laws passed in several American states. “It’s America. It is our reality. It’s not Gilead. It’s not The Handmaid’s Tale”, they warned in a video shot in 2019 in partnership with Planned Parenthood, the American equivalent of family planning. “Abortion must be safe, legal and accessible. Abortion care is health care. Women’s health is health”.

And to warn: “When we start restricting access to abortion, our country gets a little closer to Gilead. And we can’t let that happen.” Three years later, the line between dystopia and reality is even more tenuous.

See also on The HuffPost: In the United States, thousands of protesters march for the right to abortion