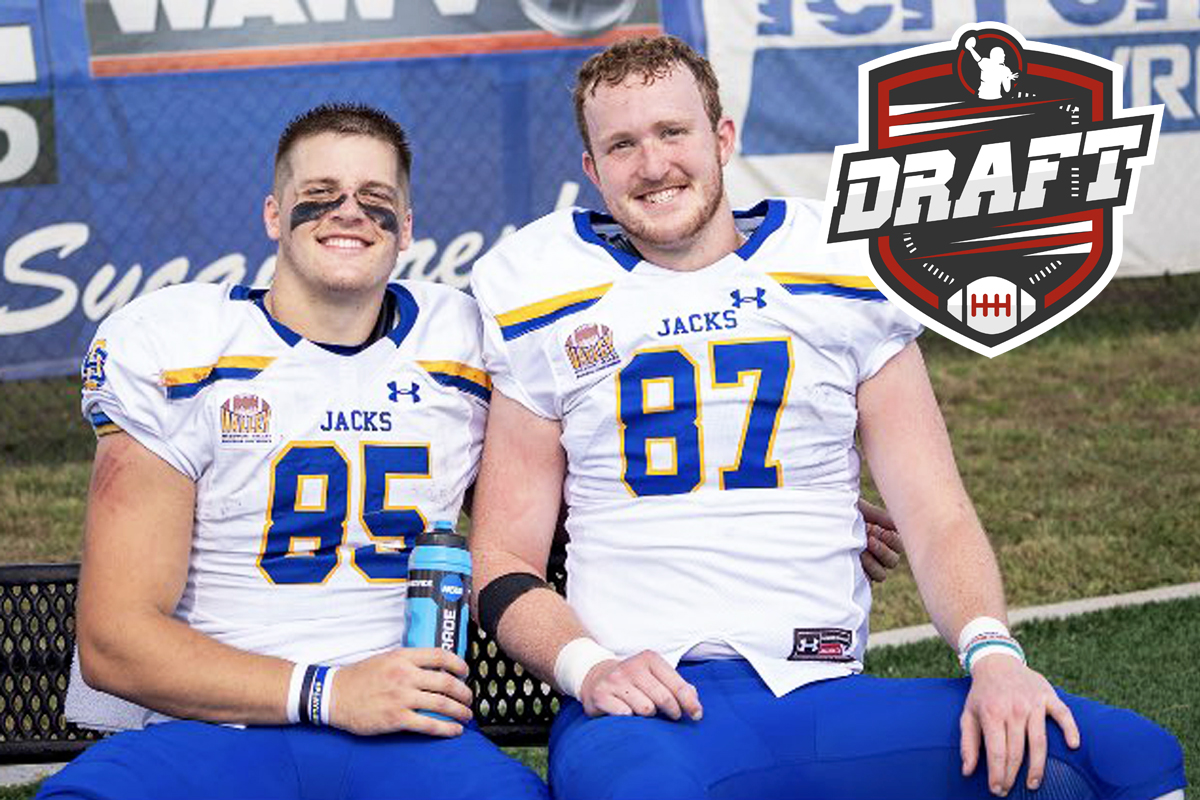 While waiting for the post-season draft sheets, the editorial staff of TDActu offers you, every Tuesday, a spotlight on the future nuggets who will join the NFL in 2023.

Two tight-ends for the price of one! Two guys from Dakota who stayed home to play at second level college (FCS).

Following his 2021 season, Tucker Kraft received offers from the upper tier, as well as an NIL (sponsor) contract. But he preferred to stay at home to finally give his college a title: it would be a first since the establishment of the FCS playoffs in 1978!

He forms, with Zach Heins (on the right in the cover photo), an impressive tandem at the tight-end position.

If I were a quality: mismatch

This term refers to a player having the advantage over his opponents. Differently, both often have it.

Tucker Kraft is an accomplished athlete. Because there were not enough students in the surrounding high schools, Tucker Kraft was playing “9-a-side football”! He played there quarterback, running-back or receiver and of course also in defense. It made him understand the game in various aspects and also required him to have different athletic qualities. His career is very similar to that of an NFL linebacker: Leighton Vander Esch (Cowboys).

Zach Heins is so tall that he already has a physical advantage over linebackers or safeties marking him. He also has velvet hands, thus allowing these famous “favorable duels” when the quarterback tries a “50/50”. It is particularly valuable near the end zone: size + good hands being a formidable cocktail.

If I were a defect: production

Both men’s playoff journey will impact their draft odds. But how hard it is to show yourself in an attack that runs more than it throws!

This Saturday, December 10, South Dakota State won its quarter-final playoffs. Another 22 assists for 35 races against Holy Cross! If Tucker Kraft was signaled with one of these receptions where he continues to advance with several players clinging to his tails, his two receptions (2 then 15 yards) cannot impress on a statistical level.

Zach Heins was once again the more “offensive weapon” of the two: only one reception but for 29 yards. Such an offensive system hardly highlights the reception qualities of the players. Especially in the face of a weaker opposition than at the 1st university level!

So, for their assessments, a moment will be crucial as to their future in the NFL.

The NFL Combine is important for all players and even more so for those coming from the second level. In 2022, Christian Watson (Packers), Cole Strange (Patriots), Trevor Penning (Saints) and Troy Andersen (Falcons) took the opportunity to raise their odds.

Above all, the formidable fullback and handyman: Hunter Luepke (North Dakota State). Capable of opening up breaches for his runners, capable of carrying the leather (9 touchdowns on the ground in 2022) and capturing it (4 TD in 2022).

If I were two NFL players: Dallas Goedert (Eagles) and Cameron Brate (Bucs)

The comparison with Dallas Goedert was too obvious for Tucker Kraft: same size and coming from the same university. Two players who know how to block: both know that to get the most possible opportunities, a TE must go to the coal! And like Goedert, Kraft is athletic enough to be a target for an NFL quarterback, creating separation with his defenseman.

Zach Heins does not have the same athletic potential! He is less lively and less effective at blocking: like Cameron Brate. But like the NFL player, when his attack reaches the red zone (20 opposing yards), his ability to be a prime target will make him valuable.

If I were two draft picks

Dallas Goedert was picked in the 2nd round (49) in 2018 and Tucker Kraft’s odds are, for now, in the same waters. For Zach Heins, it should be later, more around the 5th lap. But by April 2023, that could of course move one way or the other.

If I were two NFL teams: Jaguars and Bengals

The Jacksonville Jaguars need to surround Trevor Lawrence as best they can. Tight-ends Even Engram, Chris Manhertz and Dan Arnold will all be out of contract after this season. If still available in the first third of the 2nd round, Tucker Kraft could provide a reliable solution.

If the Bengals miss Michael Mayer (Notre Dame) in the 1st round, they could then choose a tight-end later in the draft. Zach Heins would be a good option.

This Saturday, December 17, 2022, South Dakota State will host Montana State in the semifinals of the FCS playoffs (10 p.m., ESPN2).