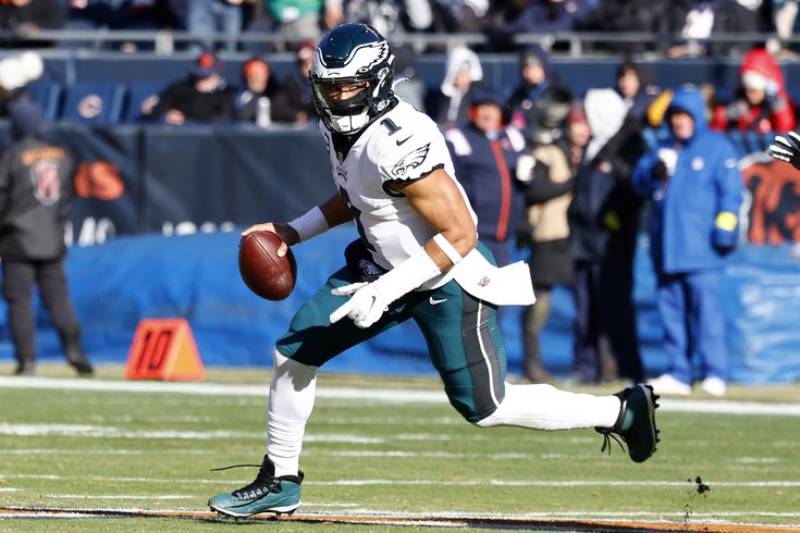 Between a confident Eagles team and an injury-hit Bears, a clean win was expected. And yet Chicago had an excellent match on the ground and knew how to cause loss of balls to make Nick Sirianni’s men doubt until the end. Philadelphia won at the end of the suspense, but Justin Fields (14/21, 152 yards, 2 TD, 95 yards on the ground) can be proud of having carried his team to the end despite an injury late in the game .

Jalen Hurts (22/37, 315 yards, 2 INT, 61 rushing yards, 3 rushing TDs) had a disastrous start to the game, throwing two interceptions, before recovering and leading his team to victory on the ground and in the air, well helped by the receiver duo Devonta Smith (126 yards) – AJ Brown (181 yards). The defense also had a good performance, especially the defensive line author of 6 sacks.

With this victory, Philadelphia is more than ever in the race for the number 1 spot in the conference. Chicago for its part is heading ever more towards the top 5 of the draft.

A diesel debut for Jalen Hurts

In a defensive start, each attack finds a way not to advance. Chicago’s offensive line takes on water, taking a myriad of sacks from the infernal trio of Josh Sweat, Javon Hargrave and Haason Reddick, with two sacks each.

On the side of the Eagles, it is the loss of balls that is expensive, with two interceptions for Jalen Hurts in the first act, for a quarterback who had only three throughout the season. Coaching also raises questions, with a total abandonment of the racing game. Devonta Smith carries her team, but it’s not enough.

After a field goal from the Eagles, it was the Bears who unlocked the situation on the ground, with Justin Fields as a detonator and David Montgomery (91 yards, 2 TD) as a finisher (6-3). The Bears do much better than figuration.

Philadelphia will give themselves air at the best time, just before halftime with an authoritative touchdown on the ground from Jalen Hurts. The machine seems launched, and the start of the second half confirms this revival with a new drive while in control. AJ Brown wakes up, and it’s again Jalen Hurts who scores on the ground (6-17).

The match seems to have turned, but that’s without counting on the ability of the Eagles to self-destruct with a fumble from Miles Sanders (42 yards), his first of the season. Montgomery takes advantage of this, and the match is tight again (13-17).

Justin Fields is injured at the worst time

While Chicago has the ball to pass, Justin Fields is still under pressure and does not get up, the Bears then return the ball after a third attempt and 14. Philadelphia then definitively unlocks the match by keeping the same recipe: from the ground and a big reception from AJ Brown. Jalen Hurts concludes for the third time on the ground before also succeeding in the two-point conversion (13-25).

Byron Pringle reduced the gap with a touchdown late in the game, but Philadelphia managed the end of the game and won (20-25) after an average game.