A big second half and a decisive interception give the victory to the Floridians. 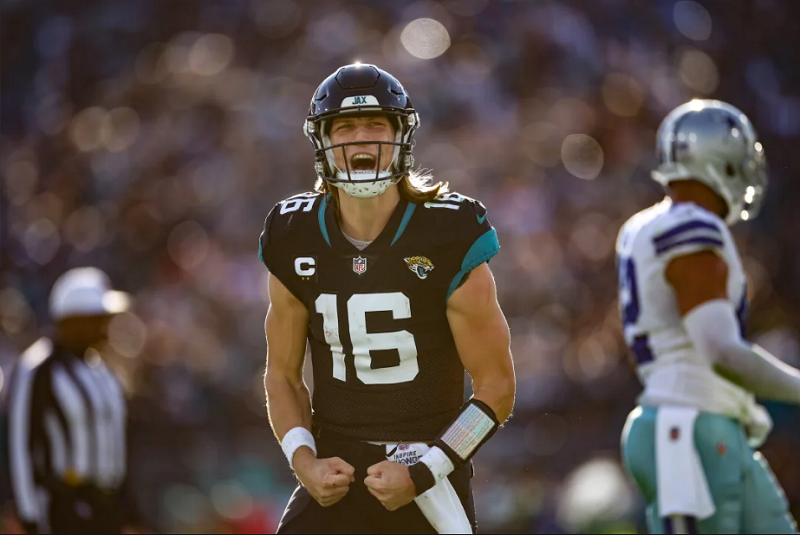 Surprise in Florida. Widely trailing and seemingly unable to react, the Jaguars turned the tide in the second half. They did, however, offer Dallas several opportunities to finalize, but an excellent passing Trevor Lawrence was able to carry his teammates to success, helped by a defense that raised its level of play at fateful moments.

For Dallas, after the warning shot against the Texans, the sanction falls. The Cowboys were unable to pack the game when they had the upper hand, and fell to a much inferior opponent on paper. A setback that could be expensive at the time of qualifying for the playoffs.

The Cowboys roll out

From the start of the match, Dallas played to its strengths. Ezekiel Elliot (71 yards, 1 TD) and Tony Pollard (106 yards) are given the leather, CeeDee Lamb (126 yards) is alerted by Dak Prescott (23/30, 256 yards, 3 TD, 2 INT), and the defense recovers a fumble from Travis Etienne (127 yards). The Texans put their paw on the meeting. No rush, actions progressing, and Elliott is the first to cross the line to light up the scoreboard (0-7 at the end of the first quarter) before being quickly imitated by Peyton Hendershot (20 yards, 1 TD).

But the Jaguars are not knocked out. Building on feigned plays and windings, the Floridians advance through Etienne and Jamal Agnew (64 yards), and reduce the score when Trevor Lawrence (27/42, 318 yards, 4 TD, 1 INT) finds Zay Jones (109 yards, 3 TD) in the paint. Despite all the effort is not enough, and the defense does not find the solution to stop the Texas offensive. After a nice breakaway on the ground, Prescott alert Noah Brown (49 yards, 2 TD) in the in-goal to reinstall two scores away. 7-21 at the whistle.

The Jaguars bare their claws

The second period opens on comparable bases and maintains the status quo. Jacksonville progresses through Evan Engram (62 yards) and Christian Kirk (92 yards), Dallas relies on Elliott and Lamb. As a result, the two squads exchanged field goals which did not change the difference in score. The turning point is thought to come when DaRon Bland (6 TKL, 2 PD) cuts off a pass from a Lawrence handball, giving the Cowboys the opportunity to add another 3 points and maintain their cruising speed without breaking a sweat. Yet the coup comes from the Jaguars. Lawrence wraps and unleashes a 59-yard bomb for Jones who rides into the paint to put both teams within 10 points. Then Prescott takes a sack followed by an interception in his own field, and Jacksonville finally puts the pressure on the meeting when Marvin Jones (17 yards, 1 TD) jumps into the in-goal. In a few minutes, Jacksonville has turned the tide and is only 3 points behind its opponent. 24-27 at the last change of sides.

At the opening of the last round, the momentum has completely changed. The Cowboys play on the heels, the Jaguars are hot and continue their comeback. To the point that the felines pass in front of the score when Zay Jones scores a hat-trick. The match will be played in the last minutes. As against the Texans last week, Dallas plays to scare but manages to strike first. A long drive that eats the clock resulted in a new touchdown from Noah Brown. And fate seems to lean on the side of the star men when Lawrence escapes from the pressure, runs down the field, comes within field goal distance, and loses the leather on contact with the cover. End of the game? No, with a handful of seconds remaining the extension is snatched at the end of the end by Jacksonville on a field goal from 48 yards. 34-34 at the end of regulation time.

The decision is not long in coming. On the third attempt, Prescott’s pass ricochets into the hands of the defense, and the ball is thrown back to the paint. Surprise victory for the Jaguars who passed 40 points to one of the best teams in the NFC.