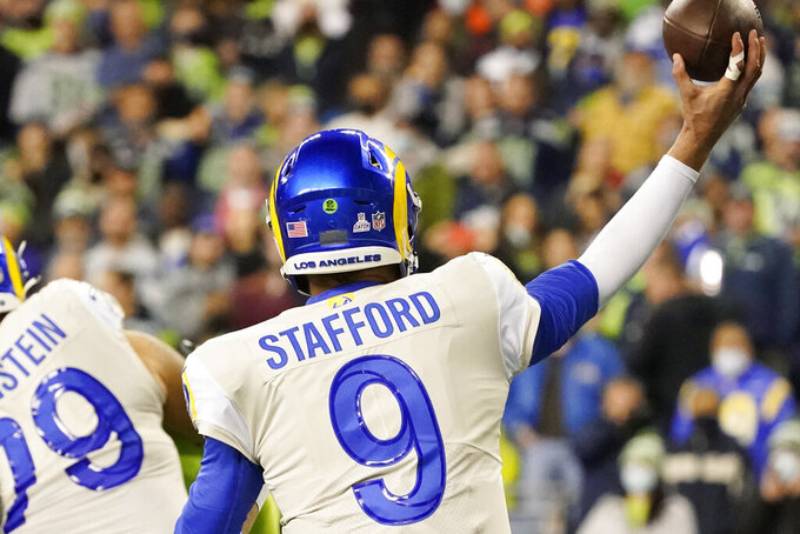 No retirement for Matthew Stafford

The hour of retirement has not yet come for Matthew Stafford (QB, Rams). A guest on his wife’s podcast, Kelly, the 34-year-old Los Angeles quarterback has put an end to career-ending rumors.

“A lot of people ask, and I know the answer, but are you going to retire,” Kelly Stafford asked.

“No,” simply replied the Rams pitcher.

The NFL soon on You Tube?

The NFL continues to test new diffusers. After Yahoo or Amazon in recent years, the league would be close to an agreement with You Tube for the “Sunday Ticket” offer. »

This package, available on American soil, allows access to all matches on Sunday afternoon. According to the Wall Street Journal, You Tube would be the favorite in these negotiations, even if no agreement has yet been finalized.

– Mike Tomlin announced that Kenny Pickett (QB, Steelers) is out of concussion protocol and will start against the Raiders on Saturday night.

– The Eagles are getting stronger (again). Dallas Goedert (TE) was taken off the injured list. He should therefore play again very soon. He had been out since mid-November with a shoulder injury. At the time of his injury, he was the second most productive receiver on his team. On the side of Jalen Hurts (QB), touched in the shoulder, Nick Sirianni explained to the press that he does not exclude a participation of his player against the Cowboys.

– Robert Saleh announced that Mike White (QB, Jets) was not recovered enough from his rib injury to play against the Jaguars on Thursday night to Friday. Zach Wilson therefore remains incumbent.

– There is a good chance that Ryan Tannehill (QB, Titans) can’t hold his place on Saturday against the Texans. Injured in the ankle against the Chargers, he should probably give way to the rookie Malik Willis. (NFLMedia)

– Short-term absence for Tyler Lockett (WR, Seahawks) ? Pete Carroll has announced to the press that his receiver has had successful hand surgery and may only miss one game.

– Absent for more than a month, Mecole Hardman (WR, Chiefs) should be back on Saturday against the Seahawks, as confirmed by his coach Andy Reid at a press conference. Good news for Kansas City as the playoffs approach.

– Sean McVay has announced that Brian Allen (C, Rams) and Ben Skowronek (WR) will not play again this season. Both men are injured in the calf.

– The Ravens recovered Sammy Watkins (WR)) on the waiver after it was cut by the Packers.

– Odell Beckham Jr. (WR) is not expected to join Dallas, as announced by Jerry Jones on 105.3 The Fan. As time progresses, the chances of seeing OBJ in 2022 diminish.

Intercepted twice and guilty of two fumbles, Tom Brady spent a complicated Sunday against the Bengals. While his team was leading 17-0 before halftime, TB12 collapsed losing 4 consecutive balls. A responsibility he took on in his podcast, Let’s Go!.

“A tough day and, man, losing sucks. It’s just reality. There are no explanations. Unfortunately, I had to explain myself too much this year. So I learn and try to be better. And obviously I woke up at 3am just trying to figure it out, I just did shitty things. You can’t win when the quarterback returns the ball four times. It’s my fault. So that’s how I feel. »

When his team led 17-0 during his career, Tom Brady had always won the match at the end (89-0). It is no longer the case. Brady will have to do more if he hopes to qualify for the playoffs, which is not yet certain.