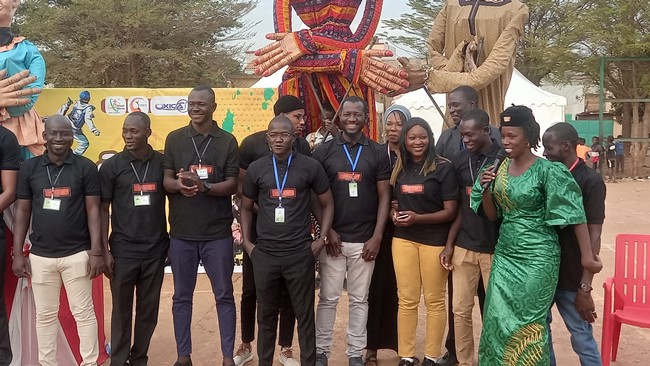 The 3e edition of the cultural days of social housing organized by the association Street Movie Save 2 Change opened on Thursday, December 22 at the football ground of 1008 Housing in Commune VI of the district of Bamako. It was under the aegis of the deputy mayor of the secondary social housing center, Traoré Fatoumata Traoré.

Organized by the Street Movie Save 2 Change association and funded by the Grand Duchy of Luxembourg to the tune of 1,500 Euros (nearly one million CFA francs), the 3e edition of the cultural days of social housing aims to create a mix between the young people of the locality. Placed under the theme of: culture and sports immersion », the present edition which will be spread over three days (from December 22nd to 24th) will be marked by sports and folklore events, film screenings, games and performances by artists.

This 3e edition promises to create a bridge between the arts, culture and sport with programs chosen to convey strong messages to the new generation, announced the secretary general of the association Street Movie, Save 2 Change, Oumar Diarra. ” Within the Street Movie, Save 2 Change association, we are convinced that the arts and culture only have meaning for a State like Mali if they are committed. Committed to citizenship, education, the environment for better public policy for the development of our communities “, explained its president, Gaoussou Ousmane Diallo.

For her part, the head of cooperation at the Embassy of the Grand Duchy of Luxembourg, Galatée Fouquet, welcomed the organization of cultural days for social housing. This is all the more so as the scheduled activities will make it possible to accompany the end-of-year celebrations as well as possible. Finally, she said she was fascinated by the talent of Malian artists and the commitment and dynamism of young people.

Bring young people together around the essentials

This activity has a considerable impact on the social and cultural development of the commune VI, recalled the deputy mayor of the secondary center of social housing. In the sense that it brings together young people around the essential which is Mali, its cultural diversity, explained Traoré Fatoumata Traoré. ” If there is one thing that Mali needs more today, it is the unity of the communities.s”, insisted the city councilor. It is on the strength of these observations that the Town Hall of Commune VI will always provide its support and all its unwavering support for the sustainability of this activity which recorded more than 6,000 participants in the 2019 edition.

The Street Movie Save 2 Change association is a cultural association created in 2014, which operates in the field of cultural initiatives (artistic orientation of young people, cultural entrepreneurship), youth education and philanthropy. In this year 2022, the association had to carry out several activities. This involves the execution of the Aw Djigui project (a multidisciplinary program for economic emancipation through art and culture between October 2021 and November 2022) and the support of 25 young people in the creation of businesses. The association also came to the aid of 60 widows and vulnerable families.

Note that the ceremony took place in the presence of the artist Master Soumy, who is the ambassador of the Street Movie Save 2 Change association. It was marked by the parade of masks and the exhibition of Taekwondo practitioners