In 1995, the company’s Microsoft Kids division launched a program called Microsoft 3D Movie Maker. In the same year that the original Toy Story film proved that it was possible to make 3D computer animations, people were able to install software on their personal computers that could produce rough but creative 3D animated films at lightning speed. of 6 8 frames per second.

3D Movie Maker (commonly abbreviated as 3DMM) is a computer program for children developed by the Microsoft Kids subsidiary of Microsoft Home in 1995. Using this program, users can make movies by placing 3D characters and props in pre-recorded environments , and adding actions, sound effects, music, text, speech, and special effects. The movies are then saved in the .3mm file format.

Aside from releasing specific Doraemon and Nickelodeon versions of Movie Maker later, Microsoft has never really come back to this software…until now. Scott Hanselman, Community Manager for Microsoft’s Developer Division, announced that Microsoft is open-sourced 3D Movie Maker code, releasing it to Github in a read-only repository under an MIT license.

The source code was released not because Microsoft has big plans for 3D Movie Maker, but because someone asked for it. Foone Turing, a self-described “hardware and software necromancer”, asked Microsoft to release the source code for 3D Movie Maker last April because they wanted to extend and develop it. Hanselman and Jeff Wilcox, director of Microsoft’s office of open source programs, then worked with Microsoft’s legal department to make this happen. 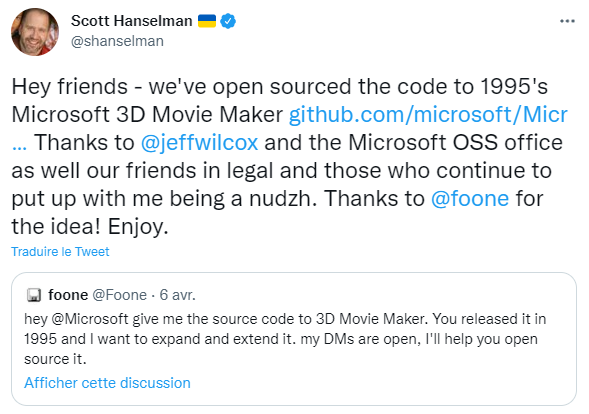 The 3D rendering engine used in 3D Movie Maker is called BRender and was used in Argonaut Software’s PC games of the mid-90s, such as Carmageddon and FX Fighter. Turing also received permission to release BRender’s code under the same MIT license as 3D Movie Maker in early April, after seeking permission from Jez San, former CEO of Argonaut Software.

3D Movie Maker is also built on BRender, a 3D graphics engine created by Argonaut Software. The models and backgrounds were made by Illumin8 Digital Pictures (a now defunct graphics studio) using Softimage modeling software, while the cinematic intro and assist sequences were made by Productions. Jarnigoine, a now inactive production company founded by Jean-Jacques Tremblay. In 1998, a user named Space Goat created the 3dmm.com site which allows users to download movies and mods for 3DMM. 3dmm.com is still used today by many 3DMM enthusiasts.

Microsoft released the program’s source code under the MIT license in May 2022, following a request from Twitter user Foone a month earlier. Asked why Microsoft was bothering to make the code for 3D Movie Maker available after all these years, because there’s never been an app like it, Hanselman replied. Even now, 25 years later, there is a community excited about this tool. 3D Movie Maker still has a small, but active, enthusiastic user base that is still producing content.

Open-sourcing the app could lead to all sorts of forked experimental builds, but Turing has planned specific updates that they also plan to release under an open-source license.

These enhancements will include updated versions of the BRender engine and 3D Movie Maker that work natively on modern systems, as well as a 3D Movie Maker Plus which removes the app’s 256 color limit, improves audio support, adds native video export capabilities, and more. The goal is to extend the functionality of the software while keeping it as simple and easy to use as the original.

3D Movie Maker has another dubious achievement to its credit: 3D Movie Maker’s dialog boxes are the first documented appearance of Comic Sans, which was developed for Microsoft Bob but was not ready when that software was shipped. Comic Sans then conquered office signage everywhere thanks to its inclusion in the Windows 95 Plus pack! Pack, Internet Explorer and other Microsoft products from the 90s.

Do you have experience with 3dmm?

What is your opinion on the subject?

Unreal Engine 5 is released, it improves the editor UI and workflow, brings a set of tools for mesh modeling, UV editing and baking

RiderFlow, the free plugin developed by JetBrains for managing scenes in the Unity editor, is available for download

LGBTQ+ developers have lobbied Rockstar to remove transphobic elements from GTA V remasters, and encourage other video game publishers to do the same