At the end of the 80s (in 1987 to be precise), the cinema hosted an adaptation of the Musclor series, with the Masters of the Universe. A film carried by Dolph Lundgren in the role of Musclor, who will obviously have to fight against Skeletor, to save Eternia. The plot takes place on Earth, and the oldest remember the presence in the casting of a certain Courtney Cox. As was often the case, the film was accompanied by an eponymous video game, and Turk182 remembers this MSX version.

In the era of 4K, ray-tracing and 60 (or 120) fps, it’s good to dive back into our video games of yesteryear, those that we still enjoy launching on the NES today. , on Master System, on Super Nintendo, PC Engine or even on a good old computer of the time. A little look into the retro (gaming), like a little video game trip to the distant past. A column hosted by Turk182, which we warmly invite you to discover on his excellent “Rétroblog“.

Masters of the Universe, the video game!

Hello old people! In that spring of 1987, once again, I was going to have to put up with a family meal and certainly a new game on my cousin’s MSX. It was becoming like a ritual at that time. I didn’t really like this machine even though I had just discovered, a few weeks earlier, an excellent brick breaker on this microcomputer. 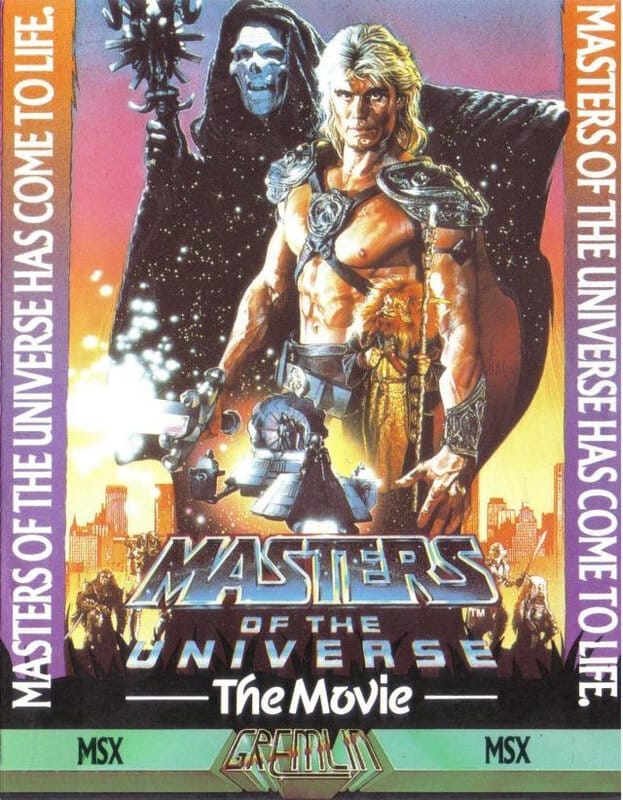 After the usual snacks, my cousin introduced me to his new acquisition, which my time did not displease me because I had had an excellent game of this franchise when I still had my Commodore 64. It was Master of the Universe – The Movie.

In Master of the Universe – The Movie you will be treated to the eternal conflict between good and evil, the prize being the cosmic key to time travel and the title of Master of the Universe. If you’re a fan of the series, I won’t tell you anything. While the cassette was spinning in his player, my cousin put me in the mood.

Lost in time, the key fell into the innocent hands of an American student. He has no idea what he owns and therefore thinks it’s just a musical instrument. But what he doesn’t know is that every note he plays attracts the evil Skeletor and his army of powerful demons. When my cousin told me all this, my mouth was watering and I couldn’t wait to see the result on the screen. The tape finished its long load and the game appeared.

The main goal was to collect 8 notes. Some could be found on the streets, but others could only be found when you defeated Skeletor’s forces. You were helped by two partners answering to the sweet names of Teela and Gwildor. They occasionally provided you with help and some valuable information. Your main enemies were Blade and Karg, against whom you had to fight, not neglecting the forces of Skeletor who attacked you in the streets and even on your super flying disc. The ultimate goal was therefore to defeat Skeletor to become a Master of the Universe.

It was all very attractive, but there were two huge problems: the slowness and the ugly color graphics. It is true that I could not get used to the games of this computer. If you follow my blog you will know that my cousin made me discover a lot of games on this machine. Sometimes very good and sometimes very bad. But even if sometimes the games were good, the typical Spectrum colors and its slowness made them insmokable. This was the case for Masters of the Universe.

Still, we were in the middle of the 80s and playing on a computer, regardless of make and model, was still a pleasure. So I made a very big effort to find the positive sides of it, and then playing two was really fun at the time. That’s why I keep an excellent memory of this game, even if in my memories the version of Master of the Universe that I had on my late Commodore 64 was much better.