The black and white photo is very sharp, but the child’s face does not tell if he is two or three years old. Lying on a changing mat on the tarmac of a parking lot, impassive, he looks at the camera. A young woman, with a firm hand at the ankles, holds her buttocks in the air, while with the other she slips a diaper between her lower back and the foam of the mattress. The child’s head touches the hubcap of the rear wheel of a Renault Nevada whose gaping tailgate reveals storage boxes.

The passenger door is also open. A hiker’s backpack, ready, it seems, for a day’s walk, balances between the door and the young woman. The nose of the car parked between two stripes of white paint comes up against the fenced enclosure of a no man’s land strictly forbidden to the public. In the distance behind, two cooling chimneys of a nuclear power plant.

For having taken this photo myself, I remember the scene very well, she had both amused and moved me. I had just come out of a reading with the staff of the works council of the CCAS-EDF-GDF. Corinne rolled from place to place with our son, Tom, strapped into his baby seat in the back of the car. She managed the logistics of Tour de France in books on foot and out loud.

This photo taken in 1998 touches me all the more since today, the child who has himself become a traveler, guide-diver and skipper, is taking a twelve-month break from his nomadic life to drive Nautilus, our traveling house that we named in honor of Jules Verne. Every evening, Tom Nemo will be waiting for me at the stage, and who knows, will tell me about his trips to the open sea, I who am unable to stand on the deck of a boat without having balance problems.

Woke up at dawn, can’t go back to sleep, but very happy with this excitement. I can’t wait for the big departure, for this moment when any action, however small, becomes urgent with this particular taste of the last time which most certainly prefigures death when it arrives. Everything is ready.

In the living room, at the foot of the sofa, a large gray wheeled suitcase, a plastic bag filled with children’s albums, a dozen pockets of the emblematic repertoire of my journey by the sea, a huge backpack strapped to a trolley, because I will not be able to put it on my shoulders as it is heavy with the last logistical embarrassments that I transfer by TGV today towards Brittany where I find the camper.

I imagine, on the platforms of the Montparnasse station, a drug trafficking patrol intrigued by my load, calling out to me and ordering me to open my suitcase wide, taken aback to discover… flour corn among my books. And next to a cap to wedge the stainless steel vegetable press that I use for soups. Zealous agents, however reasonable, without insisting, would ask me to circulate for fear of having to draw up an inventory à la Prévert.

I rarely take a bath, never in the morning. However, today, my whole body claims it. The bathtub fills up. I add twenty drops of fine lavender essential oil. Its strong perfume mingles with the steam and around, the cicadas in love, in the branches of the pines, push their song.

The bathroom opens up the sky to me, a blue Provence sky. Outside the depression Gerard smoldering terrible clouds within it.

A few minutes later, having breakfast on a fried egg and bacon, I will listen to the radio – The Battle of Soledar rages on. In eastern Ukraine, Russia tries at all costs to turn the tide of the war. At such a short distance, the pleasure of my departure, the horrors and hell. The destinies are synchronous, but so different.

Ring road south of Caen on the Route des Estuaires. Tom Nemo is at the wheel of our boat on wheels to the sound of a mix of Reggaeton. His speaker is set to high volume. Right hand to the sky, he turns his index finger in rhythm and punctuates each piece of oh oh on the sound of the engine. The depression of Gerard blow on the West. road movie…

10:23 a.m. this morning, we left La Godinière where my sister and my brother-in-law live. For three days, Claude, logistics teachers will have checked every detail, power supplies, engine battery, solar or mains, water, gas, as well as each evacuation of domestic or sanitary water. Our twelve rolling square meter studio with a view of the sea, its skies and its shores must be efficient.

As a patient pedagogue, Claude shows us the clairvoyants, transmits to us the tricks that a long experience gives him. We run from all sides for a rod, a pipe, a pan. Centrakor, Norauto, Castorama, Leroy Merlin, Districenter, Weldom and others Bonjour Caravaning before ending up with Hyper U to fill the fridge. Consumerist category, I won the gold medal.

Nemo doesn’t care, he rolls. California by Lana del Rey arrives in turn in the enclosure, but the GPS blows her decibel – Continue on the A 16 for 3 kilometers. Nemo ignores, he knows romance – Oh, I’ll pick you up – If you come back to America, just hit me up – Cause this is crazy love…

Nemo sings on the Normandy Bridge. The rain falls. The wipers wipe. The red taillights of the cars far ahead shed some light on the plume of water they are raising. Rouen. Dieppe. Messages reach me. Mail, Facebook, SMS and WhatsApp. Connections of a warm network, far beyond the easy solution of thumbs and smileys.

Aurélie, journalist, for once, answers my question: “ What do you think of when you look at the sea? »

— I don’t think precisely, I don’t reflect, I feel. I perceive an infinite horizon, I soak up lines and colors, I feel the fauna and flora that are there, the immensity of our planet, but also of the universe. When we look at the sea, we also see the sky…

She urges me to read brain and nature, by Michel Le Van Quyen, published by Flammarion, and in particular the chapter “Facing the Sea”. One more book to read.

Baie de Somme, 5:21 p.m. Night falls on a plot of winter wheat. Five deer fainted in the gusts of the stormGerard.

Here is the program of the first appointments with Mark Roger. For this first stage, hikers are invited to come with a book on the sea. A choral and collective reading will be done facing the sea. At the picnic, an exchange of books will be made for those who wish. 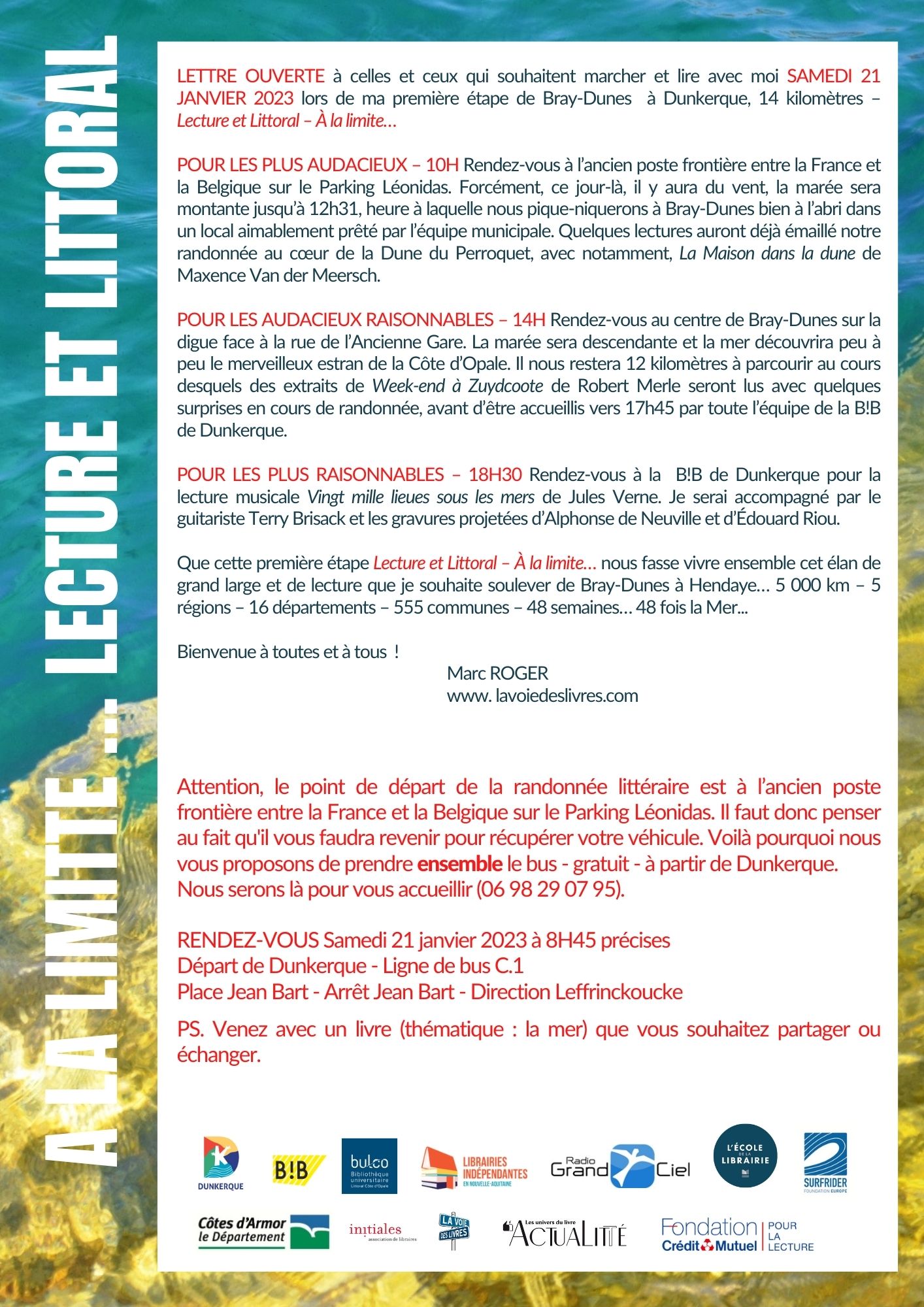 DOSSIER – Reading and Coastline: a year of readings through 5000 km of encounters